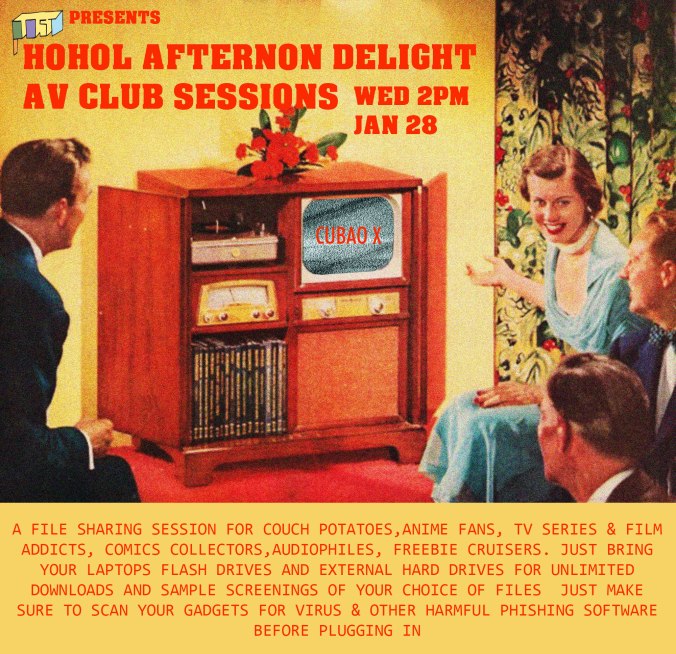 Post recently launched a file sharing session program that is hoped to proceed every 2 Wednesdays of the month. Everyone, i.e., couch  potatoes, anime fans, TV geeks & cineastes, comics collectors, audiophiles and freebie cruisers, was enjoined to bring their laptops, flash drives and  external  hard drives for unlimited downloads and  sample screening of their choice of files. Analog Files were also welcome provided that they have brought apt gadget for such, e.g. casette recorder, V8 recorder, beta player, etc.  This was co-hosted with Saturnino Basilia and Nine Iron.

Some of the sampled flicks on the first session :

The Devil in Ms Jones 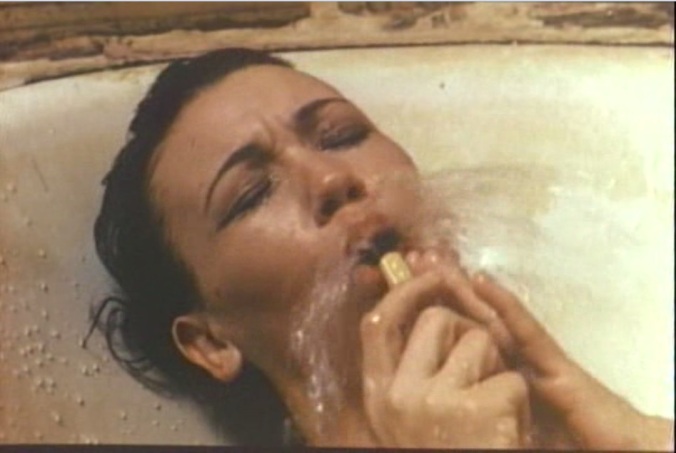 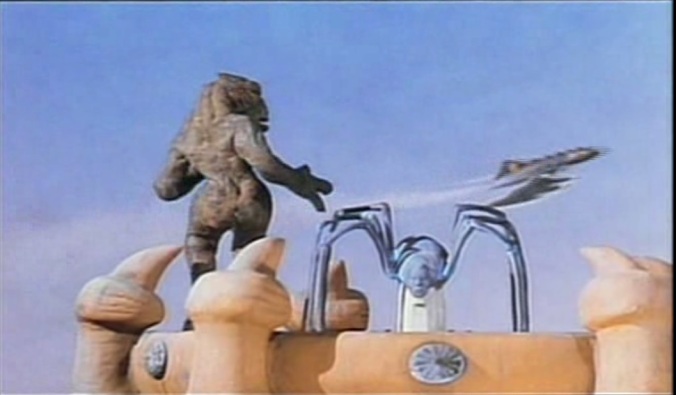 The Killing Of Satan ( Lumaban Ka, Satanas), one of those magic -realism action packed Ramon Revilla films, but with the campiness fully pumped in – about the film, here and here. The film is actually googleable, and easily downloadable so yey! for b-flick groupies.

W is War, the Pinoy Mad Max movie starring Anthony Alonzo, and another link that talks about it here 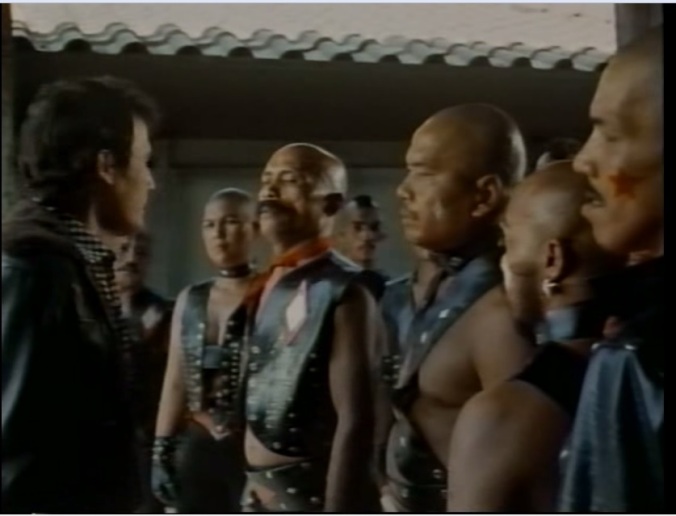 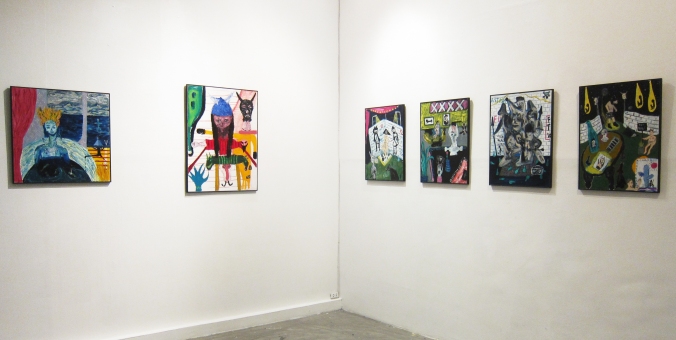 The Pope was here over the weekend and the weather was colder than usual. Despite this calm bed and beer weather, the art scene was in a crazy frenzy of simultaneous exhibit openings, like a Seizure and a burning Napalm fire as Israel Remo’s exhibit here at Post. 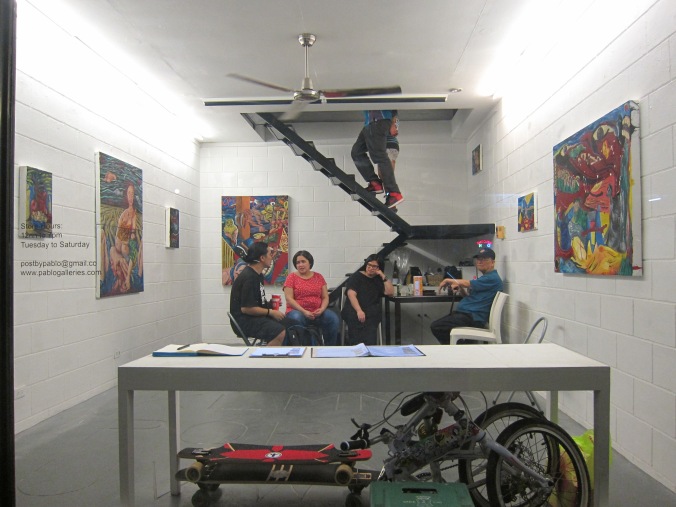 The artist Israel Remo with the writer Manuel Ocampo Sr.

Israel’s video of himself burning 2 of his paintings intended for this show. The reason for doing so was just out of impulse but he had derived cathartic release from such. 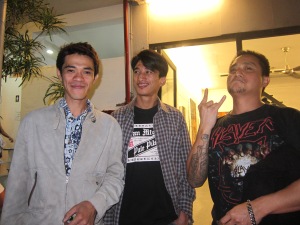 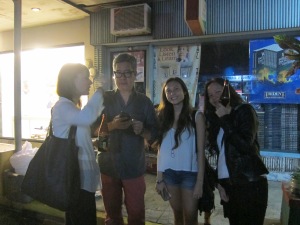 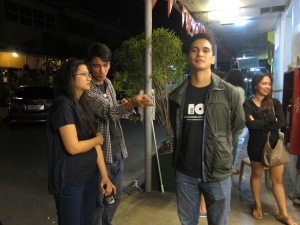 also a reunion of sorts

While these two have had a collaboration before when Cubicle gallery was still open, or before Justin Bieber was born.

Clint Catalan (was part of the trio who managed the artist-run space The Cubicle in Pasig designs clothes under the handle Wormdesigns, is also into graffitti and currently works as a production designer) and Timo Roter (originally from Hamburg but he’s been coming to the Phil for more than 10 years working on various art projects and exhibits, he also used to do graffiti before in the time of Multiply or even way earlier than that. I remember his 1st show here were photodocumentations of his graffitti bombings, but now he’ll be part of a group show opening at Vinyl on Vinyl this March) 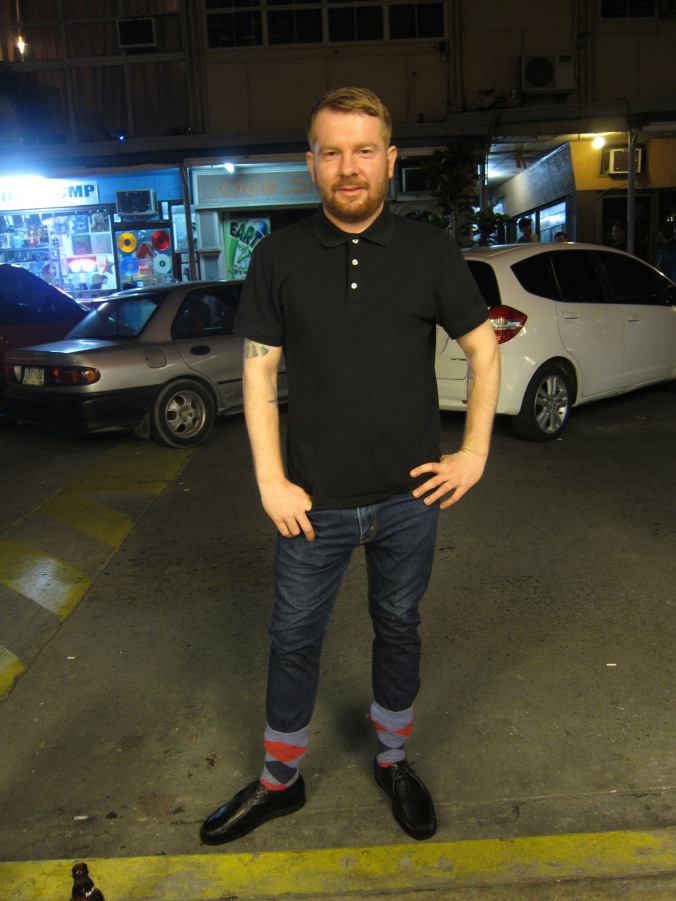 Timo and his post-hipster-expose the argyle socks, but nifty leather shoes are locally purchased from one of the last remaining shoe shops here in Cubao X 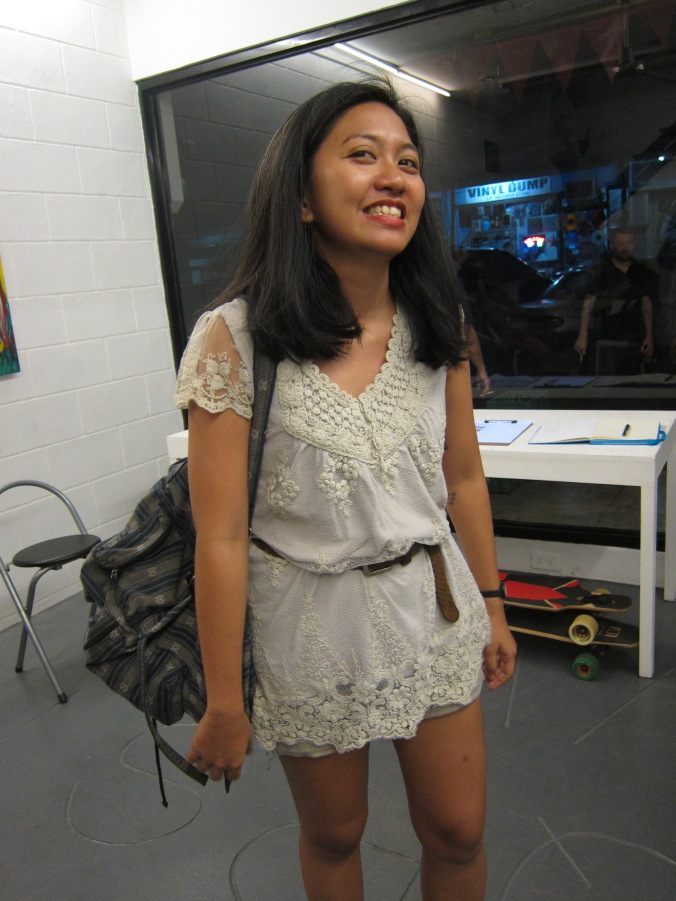 it was a bike to work kind of week as well, here with Helly, straight from his nursing duty

Israel discussing the many stages and types of seizures with writer Masi Solano and artist Jed Escueta. Israel himself, experiences seizures, hence, his works for the exhibit were the results of such attacks.

For some, like Lee and JLC this show was their last stop after 4 openings that night, but still they made it here.

A seizure is the physical findings or changes in behavior that occur after an episode of abnormal electrical activity in the brain. When this happens, the body shakes, loses momentary control of its neuro-physiological functions, or it renders the body the opposite – static, still, and falls deep into a stare that pierces infinity, belying the rattle and hum of restless commotion in the mind, birthing ideas spark after spark, surge after surge of voltaic power, a carpet bombing of the mind to waken to brilliance, as seizures are said to contribute a major part in creative thinking by uniting sensitivity, insight, and sustained critical attention.

For this exhibit, Israel Remo’s uses his own experience of seizure attacks as a trigger for his own creative output “producing a bombardment of imagery as if disoriented from the experienced realities, some convoluted, some misdirected, some disoriented, some coalescing, yet all epitomized from the same disorder of losing consciousness” as his paintings depict distorted rooms and nightmarish scenarios in fast cut-up montages.

Israel Remo had Fine Arts training from Kalayaan College and at UP College of Fine Arts in Diliman. He had been actively exhibiting since 2008 where his discordant but brilliantly hued paintings of hiccupping catharsis were featured.  Seizures : Napalm Visit is his 2nd exhibit.

Seizures :Napalm Visit would have its opening cocktails on the 17th of January at 6PM and will be on view until the 28th of February of 2015.

The hangover from the long holiday season lingers a little with the chilly breeze of January that makes one guzzle more whiskey without getting drunk, meaning, the weather is just terrific these days! It’s perfect for drinking and chatting at art openings, such as the opening of Autonomy Warriors with Australia-based artists David Griggs and Rene Sinkjaer at Pablo The Fort last January 10. 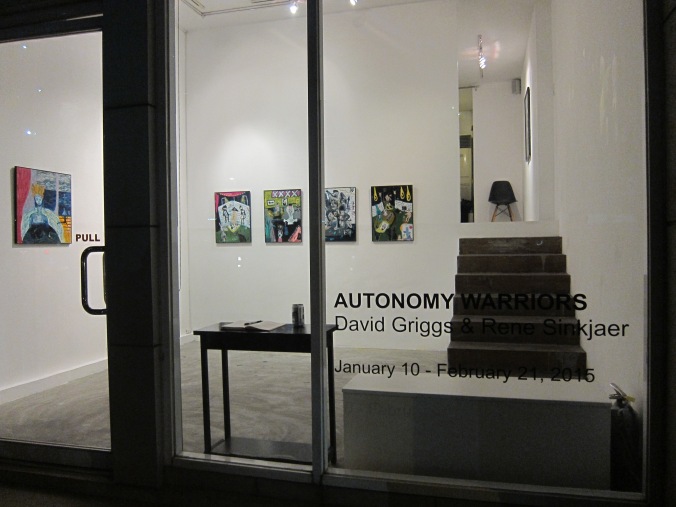 Rene Sinkjaer’s works. Originally from Denmark, he just recently moved to Sydney where he is now based.  Although painted briskly and instinctively in a naif style, they are rich in symbolism and metaphorical allusions to mortality and creation.

David Griggs’ suite of photographs of skater girls. He’s also produced a limited edition monograph of these photos which quickly got sold out that night.

Let’s get the party started with these : 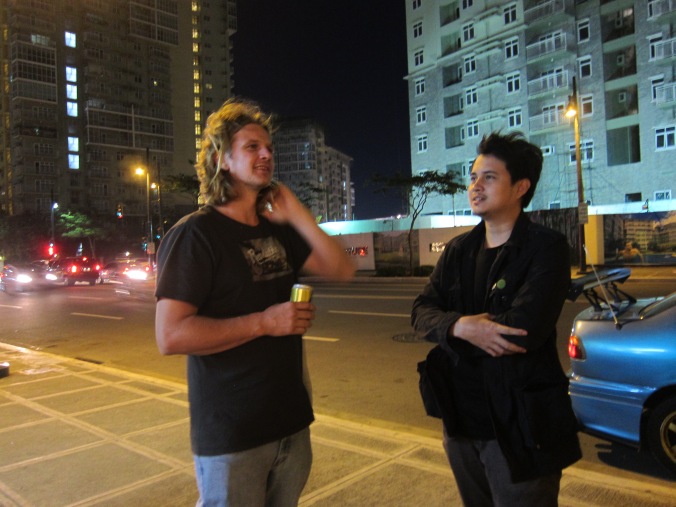 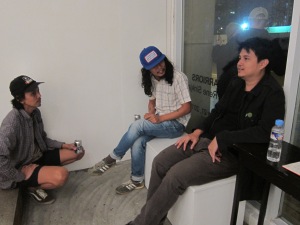 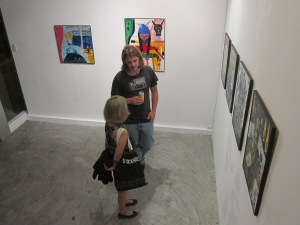 There was some trouble earlier. This guy was soliciting 200 bucks from one of the gallery guests. The Fort cops said on the other hand that he was drunk already. 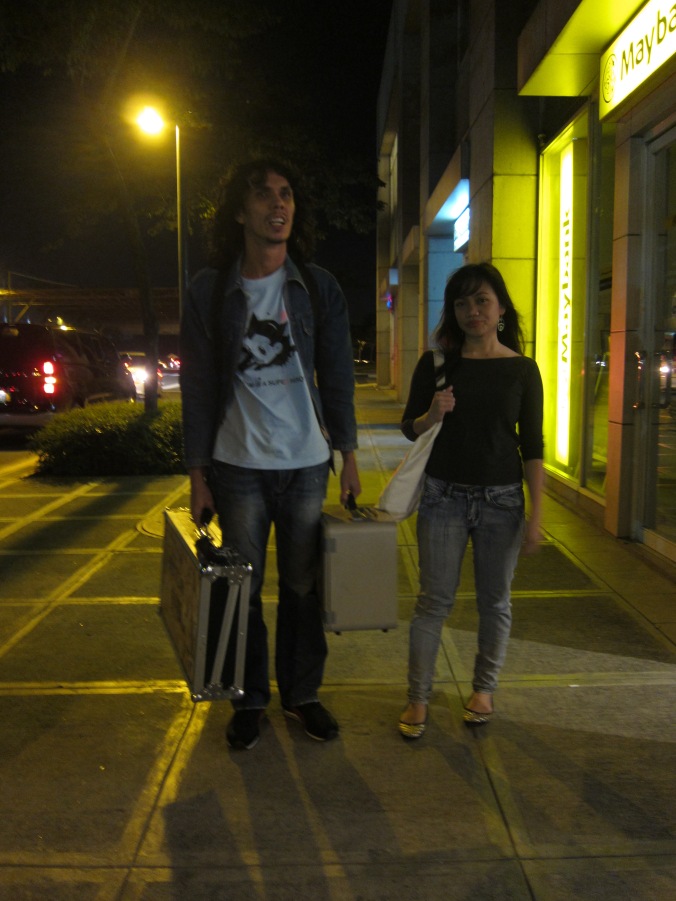 The rockstar and his muse. Pastilan Dong lead Kaloy Olavides fully equipped for a gig 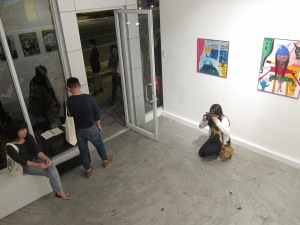 A mini college reunion : Jed, Erin and Mike Crisostomo who will be opening his solo show soon this April at Post Cubao 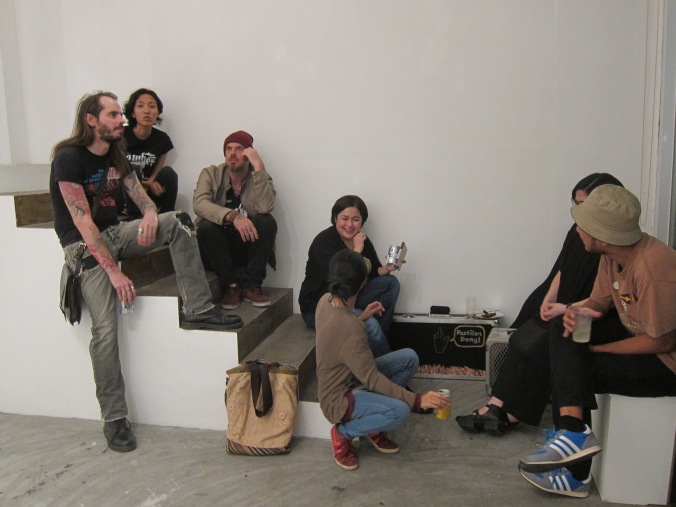 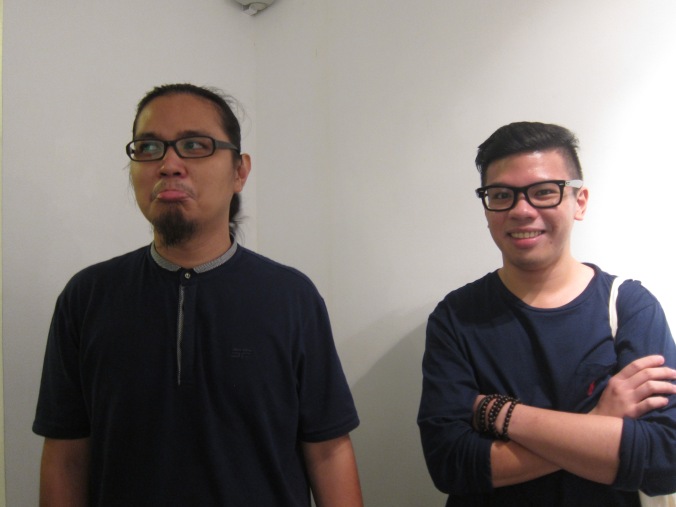 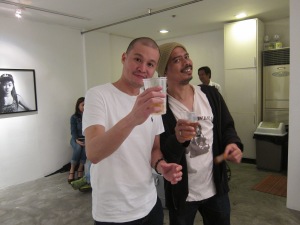 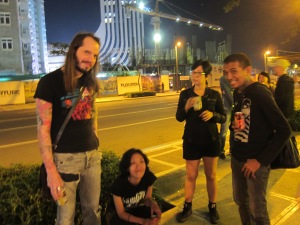 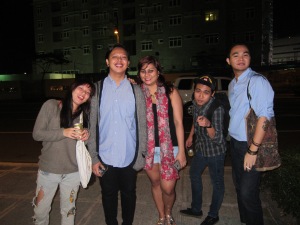 Pablo Gallery opens the year with an exhibit called Autonomy Warriors by Australian artists David Griggs and Rene Sinkjaer.  David Griggs had been based in Manila since 2005 and had been documenting subcultural scenes from prison gangs, tattoo artists, skateboarders, and other denizens of the gutters of urban Manila, straightforwardly depicted where their scars and wounds and pus ooze and gape wide open for their visceral truthiness, at times incorporating some of these images onto his paintings that are colorful pastiches from his subconscious psychogeographic meandering of the streets of Manila. This time, he focuses his lens on skater girls of Cubao, girls that are on the verge of womanhood but inundated by the bruises of their sport, defiant of the usual dainty images of girlhood.

Both artists will be present at the opening on the 10th of January, Saturday at 6PM.

David Griggs will also be releasing on the opening his book Warriors, a collection of photographs which comes as a 38 page hardbound book in 20 limited editions.

The exhibit Autonomy Warriors will be on view until the 21st of February.

Pablo Gallery is at South of Market Condominium, at the corner of 11th Avenue and 24th Street, Bonifacio Global City, Taguig; and is open from Tuesdays to Saturdays 12 – 7PM.

Rene Sinkjaer only began to paint in 2004 after he migrated to Sydney from his country of birth of Denmark, tapping belatedly the keen curiosity and fascination for art he’d been harboring since he was a kid.  His paintings are seemingly autobiographic scenes from a life of an artist depicting scenarios such as an artist’s garage sale, graffiti painting in the shower stalls, an orgiastic party, the interior/parlor of a collector/ eccentric. These are rendered naïf-like in bright colors, he paints minimally a narrative that unfolds in each viewing – maybe macabre, maybe based on something real, maybe entirely from imagination, yet belying a gravity of pathos despite the brevity of strokes, and directly quoting Philip Guston who has said of painting as “autonomous, pure and for itself, therefore we habitually analyze its ingredients and define its limits. But painting is ‘impure’. It is the adjustment of ‘impurities’ which forces its continuity.”

This would be Sinkjaer’s  first time to exhibit in Manila.

Rene Sinkjaer was born on the West coast of Denmark in 1977.

In 2001 he attended a technical college where one of his teachers noticed that every book of Sinkjaer’s was covered in doodles and pointed out that maybe he should be attending a different class.  Two weeks later that same teacher decided to take the class on a excursion to the art museum, it was here Sinkjaer was introduced to the magical world of creativity, it was the Cobra painters Asger Jorn, Corneille, and Carl-Henning-Pedersen that caught his attention, the vibrant colors and quirky imagery was exiting and liberating. In 2004 he moved to Sydney on a one year thinking pause, a way to break free from bad habits and start anew. One day he walked in to an art supplier and bought his first blank canvas, this would be the beginning of 10 years of feverish search for a personal style, a fresh image. 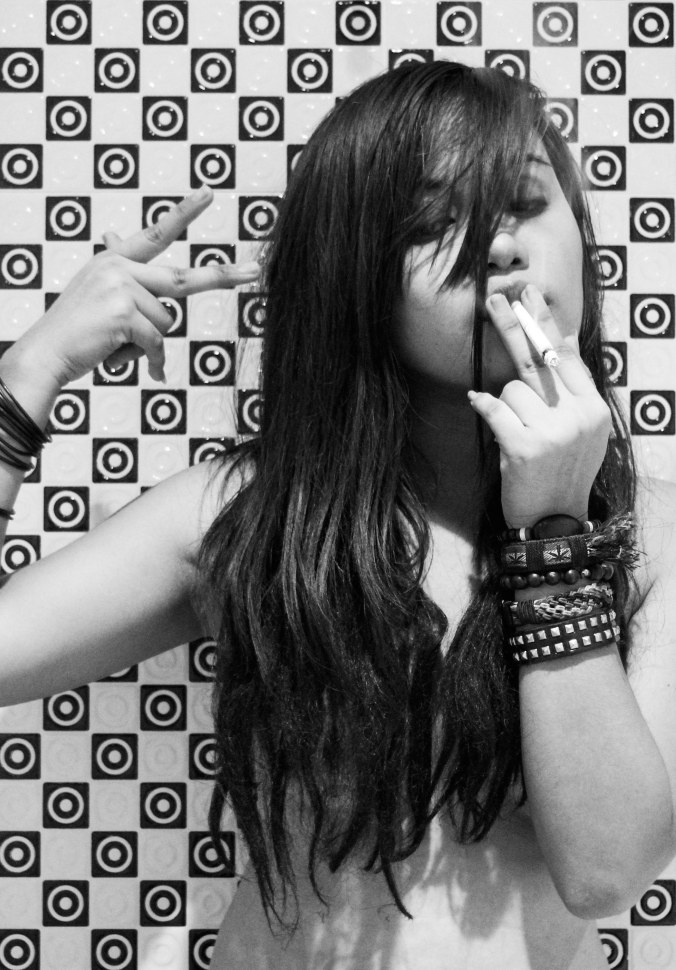 David Griggs was born in Sydney, 1975. He currently lives and works in Manila, Philippines. Griggs is known best for his paintings, photography and film projects. He works closely with various communities and artists both in the Philippines and Australia. He has exhibited extensively in solo and group exhibitions throughout Australia, Asia, Europe and America. He has conducted research for projects during residencies in Barcelona, Manila, Thailand and Burma. His work has been presented in numerous exhibitions including Frat of the Obese, Roslyn Oxley9 Gallery, Sydney (2011) Fluid Zones Biennale Jakarta XIII (2009), Blood on the Streets, Artspace, Sydney (2007), The Independence Project, Galerie Petronas, Kuala Lumpur (2007), Exchanging Culture for Flesh, Art Gallery of New South Wales, Sydney (2006), Primavera, Museum of Contemporary Art, Sydney (2006), Post Criminal, Kaliman Gallery, Sydney (2010).  David Griggs is represented by Roslyn Oxley9 Gallery, Sydney, Station Gallery Melbourne and Greenaway Art Gallery, Adelaide.